The UK’s airspace is an integral part of the wider European air traffic management (ATM) system. Europe’s airspace is busy and complex and any major delays or issues in one piece of airspace can have a knock-on effect in other parts of the network, so it is vital that they are identified, anticipated and managed appropriately to avoid any disruption. The Network Manager was set up by the European Commission in 2011 to do exactly that, and to ensure the whole European system functions efficiently. The role of Network Manager has been designated by the European Commission to Eurocontrol until 2019. 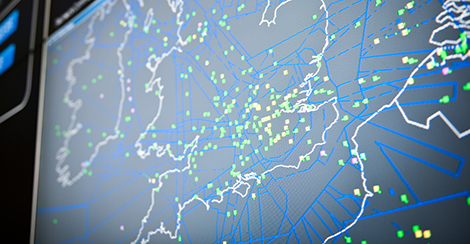 As a major part of Europe’s North Atlantic Gateway, NATS operation is a vital part of the wider European ATM network.

The work of the Network Manager is overseen by the Network Management Board (NMB). The NMB is comprised of representatives of an Air Navigation Service Provider (ANSP) from each Functional Airspace Block (FAB), commercial and non-commercial civil airspace users, airport operators and the military, as well as the European Commission and Eurocontrol (in a primarily non-voting role). It is responsible for a wide range of activities related to the functioning of Europe’s airspace network, including setting the annual Network Operations Plans and monitoring their implementation. Jonathan Astill, Director of International and Customer Affairs at NATS and Peter Kearney, Director ATM Operation & Strategy at the Irish Aviation Authority are the UK-Ireland FAB representatives to the NMB.

Simon Hocquard, Director of Operations, Strategy at NATS was appointed as independent Chair of the Network Management Board in 2015, until the end of RP2.

Alliances NATS is a founding member of two of Europe’s leading ANSP Alliances.

News and updates See the latest news, views and newsletter related to NATS activities in Europe.

Multimedia A selection of videos, photos and infographics related to our activities in Europe.