The first section of ground has been broken in preparation for Manchester Airport’s new Air Traffic Control (ATC) tower. To capture the construction from start to finish a time lapse camera has been installed to show every moment that goes on during the build, which will be made available for the public to view. 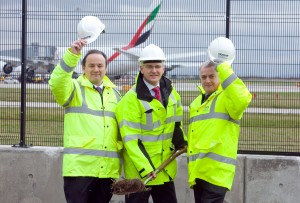 Work has now started at the site and the 60 metre high tower is expected to be completed by Spring 2013. Construction, design and infrastructure company Morgan Sindall, the contractor for the £16m project, was present at the sod cutting ceremony.

NATS, the UK’s leading air traffic control company, and Manchester Airport have teamed up and launched a time-lapse camera that is located on the roof of the current tower over looking the new tower site. It will take a picture every 15 minutes over the course of the project and there will be a weekly one-minute video produced of the works to date that will also be broadcast on the airport’s Youtube channel.

Andrew Harrison, Manchester Airport’s Managing Director, said: “Now the contractors have been announced and work has commenced, this film will be a great way to monitor the progress of the new tower build. It’s a large construction project for Manchester that will create jobs in the process and we are keen to show the benefits of the project to a wider audience across our region. I know that it will be an iconic addition to the Manchester skyline.”

James Morgan, area director at Morgan Sindall, said: “Securing the contract for the new air traffic control tower is testament to the expertise we’ve developed in the UK aviation sector and our ability to consistently deliver on time and to budget.  We are working closely with Manchester Airport’s in-house team as well as architects CPMG and engineers URS Scott Wilson to deliver this project and are delighted to start work on site.”

Paul Jones, NATS’ General Manager at Manchester, said: “We are delighted to be working in partnership with Manchester Airport Group on the fitting out of their new tower.

“From our vantage point in the current air traffic control tower we will be able to see progress on the new tower every day, and it promises to be an exciting new addition to the airport landscape. We are already planning ahead to next November when we will be able to start fitting out the tower with the 70 different systems that we require – from radar processors to communications equipment, Electronic Flight Progress System (EFPS) and plasma touch displays.”

The control tower, located adjacent to the north fire station, will house a new visual control room, alongside an approach radar section and navigation, surveillance and communication equipment to ensure ATC can effectively service the long-term investment and future growth of the airport.

The new tower will be a standalone, purpose built building, with the base of the building housing a new equipment centre and offices for the Air Traffic Control company, NATS.

With 360-degree panoramic views, it will provide unrivalled views of the entire airfield operation. At present, cameras are used by controllers to assist with the view to the furthest runway end.

NATS will manage the equipment and run the tower’s 24-hour operation while Manchester Airport will own and maintain the building. The current air traffic control centre, located on top of the tower block, is 40 years old and is being reviewed as part of the renovating process.