A trial to cut the amount of time aircraft spend circling in ‘holding stacks’ at Heathrow Airport has started to reap rewards.

Led by air traffic services provider NATS, as part of the UK-Ireland FAB and in collaboration with FABEC and Heathrow Airport, the trial has the overall aim of cutting average holding times by a quarter from the current time of eight minutes.

Since April 2014, NATS has recorded a reduction of up to a minute in holding times for those flights influenced by the trial, saving airlines around £1 million (€1.25m) in fuel and 5,000 tonnes of CO2, as well as reducing noise for communities underneath the stacks.

The trial has seen controllers in the UK, France, Ireland and the Netherlands working in partnership to slow aircraft down up to 350 miles away from London in order to minimise holding times on arrival. It is the first step of a broader strategy to reduce the amount of time aircraft spend holding at Heathrow.

Absorbing delay in the en-route phase, when aircraft are higher and more efficient, saves fuel and CO2 while minimising noise for the communities living beneath the stacks.

Heathrow is scheduled to 98% capacity and relies on having the continuous flow of traffic that the stacks provide, but NATS’ aim is always to minimise the amount of time aircraft have to spend in them. Traditionally, it can only influence an aircraft’s approach to Heathrow once it enters UK airspace, which is sometimes only 80 miles from the airport. This therefore limits the chance to manage the inbound flow of traffic.

Martin Rolfe, NATS Managing Director, Operations, said: “Taking 60 seconds out of holding for trial influenced aircraft may not seem a lot, but it is a significant achievement and equates to serious savings for our airline customers while proving that this kind of cross border cooperation can reap real benefits.  The next steps involve us taking what we’ve learnt so far and improving and refining our procedures for even greater results.”

Derek Provan, Airside Director at Heathrow Airport, said: “This trial is a definitive step in the right direction towards quieter and more sustainable airline operations. We welcome the efforts NATS has made, and for working with us to make Heathrow a better neighbour to local residents.” 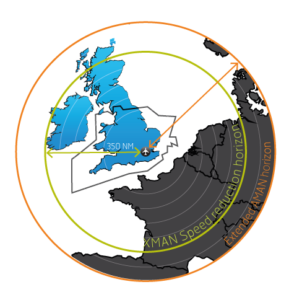 In September 2014 the trial entered its third phase, with the minimum stack delay threshold reduced from nine minutes to seven and the maximum speed reduction raised to 0.04 Mach from 0.03. Moreover, the Brest Air Traffic Control Centre (ACC) also joined the trial to take into account more inbound traffic.

Maurice Georges, Chief Executive Officer of DSNA, the French Air Navigation Service Provider, added:  added: “With Brest ACC joining the trial, we have symmetry in the application of XMAN procedures. At the same time, under the umbrella of the SESAR programme, Reims UAC has refined the concept and introduced a new prototype for gathering London arrivals data and an improved radar trajectory prediction model. The ‘working together’ spirit is bringing real benefits to the community!”

This trial demonstrates the UK-Ireland FAB’s, FABEC’s and Heathrow’s commitment to deploying innovative SESAR concepts as part of its implementation plan, and also the practical achievement of inter-FAB collaboration.

The XMAN project was highly commended at the Institution of Engineering and Technology’s innovation awards in the Intelligent Systems category.