Richard Deakin, Chief Executive, commenting on the results, said:
“We have made strong progress this year. Revenue and operating profit before exceptional items improved and our financial position remains robust.  Our profit before tax at £157.5m (2013: £160.8m restated) was £3.3m lower than last year but this result included the cost of a redundancy programme and a goodwill impairment charge.

“Our major focus this year has been on consulting extensively with en route customers on our plan for Reference Period 2 (RP2) (2015-2019) for our economically regulated business.  We were innovative and ambitious in our approach, presenting a real choice of service offerings and with a clear focus on cost reduction and the economic value from better airspace design, more fuel efficient flight profiles, improved network capacity and minimal delay.  After review by the CAA and the DfT, our final plan contains real price reductions of over 21% over the 5 year period exceeding EU-wide targets in all the key performance areas of safety, capacity, environment and cost efficiency.

“We have also continued to capitalise on new commercial opportunities in the UK and overseas and secured orders of £128m from contract renewals and new business. I believe our strategic position is stronger, our order book shows the prospects are bright and the foundations are in place which will enable growth in the future as markets liberalise.”

NATS safely handled just under 2.2 million flights during the year (2013: 2.1 million), an increase of 1.7% on the previous year.  Average delay per flight attributable to NATS was 5.5 seconds (2013: 1.4 seconds) which is about one-fifth of the average European delay per flight and was despite a ground communications failure on 7th December 2013 that resulted in delays to customers.  NATS continued to enable significant savings in fuel and CO2 emissions for customers which, since 2006, the company has estimated to be worth c. £255m to customers.

NATS continues to advise the work of the Airports Commission in its consideration of potential options for future airport capacity in south-east England. This includes early assessment of shortlisted options, including airspace considerations for new runways or airports, with a particular emphasis on operational and network feasibility and identifying key constraints. 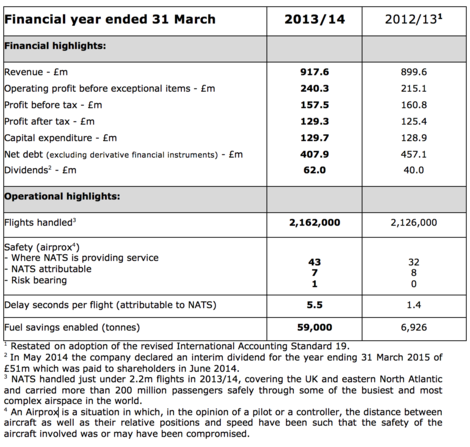