NATS, the UK’s leading provider of air traffic control services, has today signed a formal declaration of support to acknowledge its close co-operation with the Armed Forces community.

The Armed Forces Covenant was jointly signed at NATS Control Centre in Swanwick, also home to RAF(U) Swanwick, on behalf of the Ministry of Defence by Air Vice Marshal Chris Elliot and NATS’ HR & Corporate Services Director Julie Elder. It means that NATS has committed to a number of key principles, primarily:

In addition, NATS has made further commitments to supporting military personnel by ensuring they can participate in key events such as Armed Forces Day, advertising job vacancies amongst the armed forces community and supporting the employment of Services spouses and partners.

Ewan Kelbie, Director MOD Capability for NATS, said: “We are very lucky that our control centres in Swanwick, Hampshire and Prestwick in Ayrshire and our corporate office in Whiteley, Fareham are all located in areas of the country with a rich military history and numerous existing military bases.

“Having people in the organisation with a deep understanding of the Armed Forces enables us to continue to develop our relationship with the MOD and to improve the services we provide now and into the future.” 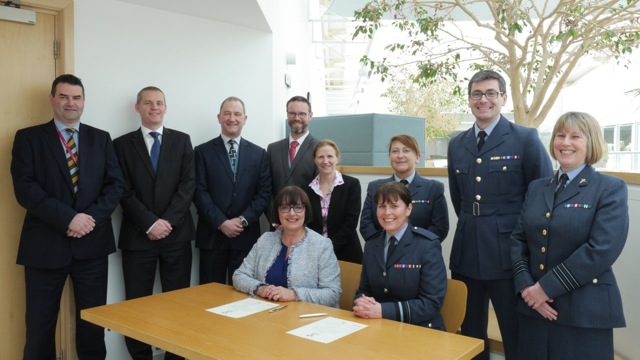 Air Vice Marshal Chris Elliot said: “I am delighted to be signing the Armed Forces Covenant with NATS on behalf of Defence, as it is an important step in further developing the mutually beneficial relationship between ourselves in support of our Armed Forces Community.

“The RAF has a long association with NATS, with regular, reservist, former members, and family members of the Armed Forces working alongside their civilian counterparts. This is a positive commitment by NATS, which I am certain will be fully appreciated by all our community who work within the organisation.”

The UK is a global pioneer of civil and military partnerships in Air Traffic Management and NATS is committed to ensuring that this partnership widens and deepens over the coming years.