Time Based Separation (TBS) is now in operation at Heathrow Airport. Jointly developed by NATS and Leidos (formerly Lockheed-Martin), the system represents a global first: Heathrow’s is the first TBS system to be implemented anywhere in the world and paves the way for TBS to become the norm at capacity-constrained airfields over the coming years. The original TBS will be updated in Spring 2018 to incorporate RECAT EU wake categories. 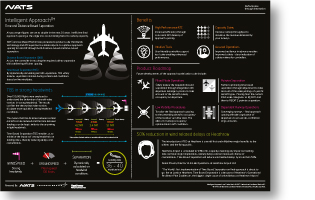 Heathrow Airport’s TBS system and procedures are already making a significant difference, easing inbound air traffic flow management and reducing the airborne holding delays due to the effect of headwinds on aircraft final approach. This will be further improved with the introduction of enhanced TBS in Spring 2018 which introduces RECAT EU wake vortex categories and will slightly increase tactical landing capacity.

Under the previous final approach system of fixed-distance separation, aircraft groundspeed dropped when headwinds increased, reducing the landing rate – which in turn led to extended airborne holding and increased delays.

In order to prove that the application of time based separation is safe, using LIDAR equipment over a period of nearly five years we measured the wake vortex of more than 150,000 Heathrow flights, including all aircraft types. The data we gathered clearly shows that as the headwind component increases the wake vortex decays at a faster rate – and these findings allowed us to develop a new set of rules for separating inbound flights by time rather than distance, taking into account the wake vortex category for each aircraft as well as the effect of headwind on vortex decay.

Adopting TBS requires little or no change to flight deck procedures. Aircraft continue to be radar-vectored onto final approach in the same way and at the same speeds as under the previous distance-based regime. The main difference under TBS is that air traffic control separates aircraft on final approach by time, not distance. In practice this means that aircraft may appear closer on Traffic Alert and Collision Avoidance Systems during headwind conditions although the actual separation will be constant in time. It is important that aircraft maintain controller-assigned speeds as accurately as possible in order to deliver the maximum benefit possible from TBS.

Click on the links on this page for further flight crew information on TBS, including a short video that describes its context, a briefing sheet, and associated aeronautical publications. NATS has also produced other media that help describe the TBS concept and background – these can be accessed via the links below:

If you have any questions on TBS please contact customeraffairs@nats.co.uk.