The world first implementation of Time Based Separation saw NATS scoop the Runway Award with project partners Lockheed Martin, Heathrow Airport and EUROCONTROL. Designed to help maintain the landing rate during strong headwinds, TBS has been hugely successful in cutting delays at Heathrow. In November 2015 alone the system saved 25,000 minutes of air traffic flow management delay and is on track to more than halve overall headwind delays. 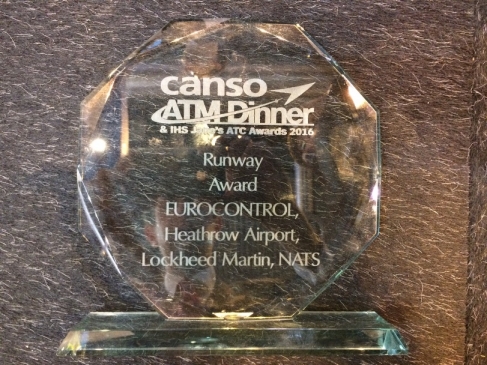 Juliet Kennedy, NATS Operations Director, said: “The Jane’s ATC Awards are one of the most prestigious awards for our industry and this is a tremendous accolade for everyone involved. It is recognition of the success of our partnership approach to delivering innovative projects that offer our customers tangible benefits.”

The prestigious IHS Jane’s ATC Awards 2016 recognised the best achievements by industry and ANSPs over the past year, rewarding winners for their innovation and collaboration. The awards were announced at the CANSO ATM dinner in Madrid on 7 March, prior to the CANSO World ATM Congress 2016.