NATS has apologised to Heathrow Airport Ltd for not highlighting an operational change to air traffic control which has affected some of the same communities that were affected by the airport’s airspace trials which ended last November.

Following further complaints from residents, Heathrow asked NATS if there had been any other airspace changes and we confirmed there had been none, as a result of which Heathrow made public assurances to residents. Following further investigations, the earlier procedural change was then identified which has led to a change in flight patterns over some communities to the south and southwest of Heathrow.

In June 2014, NATS changed the way air traffic controllers direct aircraft within an area of existing airspace. This change only applies when the airport is on easterly operations, and affects only the Compton route which accounts for around 16% of departures, or 6% of total departures. It involves directing aircraft through a ‘gate’ approximately seven miles wide in the Compton area at approximately 8000ft; this ‘gate’, previously 13 miles wide, allows NATS to improve air traffic management in the area, enhancing safety and efficiency.

This new procedure involves NATS (NERL) in terminal control in Swanwick climbing aircraft more quickly out of Heathrow on the Compton route and more clearly separating them from Heathrow inbound streams that in the past they would have had to transit underneath at low level. There is a net safety benefit of doing this through greater systemisation of the airspace and a clearer separation of inbound and outbound flows of traffic. There is also a net benefit to the public as a whole, as these departures now climb more efficiently, reducing overall ground noise.

The area involved is designated as a Radar Manoeuvring Area. NATS is therefore authorised to “vector” (direct) aircraft tactically in line with our obligations under our CAA licence to achieve safe, efficient and expeditious air traffic control. NATS is not required to consult on operational changes of this type as we are not moving, creating or changing routes or redesigning airways.

Our first priority is safety, and we also seek to use existing controlled airspace in the most efficient way to provide expeditious service to users. The change is in line with the Government’s Aviation Policy Framework, which states ‘limit and, where possible, reduce the number of people in the UK significantly affected by aircraft noise’. We have therefore explained to Heathrow that we are not intending to revert to previous procedures.

There is no suggestion that NATS did not follow the current agreed process. However, we have already taken steps to ensure more robust processes are in place to share relevant information with Heathrow so that they are aware of any changes that may be noticed by local residents. 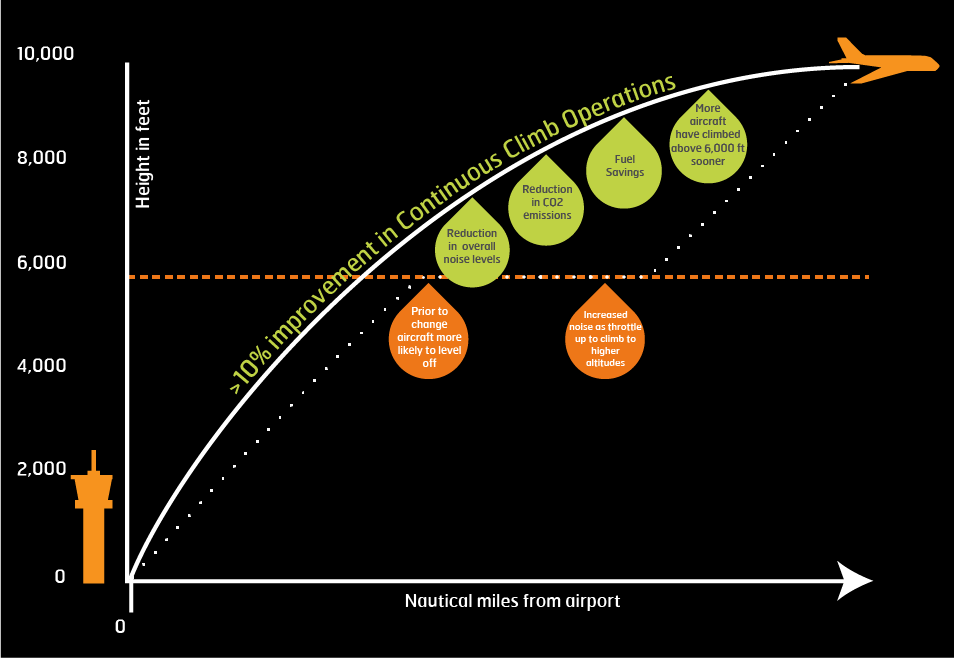 Q: Why did you and Heathrow say that all the trials had stopped when evidently they hadn’t?
A: The recent DEP route trials around Heathrow started on 28 July 2014 and ended on 12 November, as Heathrow Airport Ltd promised. This NATS change was introduced on 27 June 2014 and is unrelated to the DEP trials. It is a procedural change to the way that aircraft are directed within existing airspace which has been implemented to enhance safety and efficiency. We should have realised that it might affect some of the same people as the DEP trials, but we didn’t and we are sorry for that. We most certainly had no intention to mislead.

Q: What is this change?
A: It is a procedural change to the “Compton Gate” which affects aircraft departing Heathrow on the Compton route to the west, when the airport is on easterly operations (about 30% of the time). The Compton route is one of six departure routes used when Heathrow is on easterlies.

Prior to the change, aircraft using the Compton departure route were directed across a wide swathe of airspace before moving into the next sector of higher level airspace at approximately 8,000ft anywhere within a 13-mile “gateway” near Compton (hence its name). This gateway has now been narrowed to around 7 miles which means that aircraft are climbing through a narrower area of the existing airspace in order to be in the right place to go through the gateway. This has resulted in more concentration of departure aircraft activity over some areas and a reduction in others so some people will notice more aircraft while others will notice less.

Q: Why didn’t you think that it would matter to people complaining about the DEP trials?
A: At any one time NATS has more than 30 procedural trials and changes under way in higher airspace, where we are solely responsible for safe and efficient air traffic management. Achieving this higher level change at 8,000ft has meant some change in aircraft position at lower altitudes on the Compton route; we apologise that this wider significance was not identified by those involved.

Q: Why was this change made?
A: NATS is required to provide as safe and efficient air navigation as possible in a very busy and complex airspace. This change has enhanced efficiency by making it easier for controllers to predict the position of traffic as it nears the gateway. Directing departures through a more defined area also reduces interaction with arriving traffic, which enhances safety; departures were previously held at lower level below the arrivals but can now climb more quickly to higher altitudes, which reduces the overall environmental footprint.

Q: Surely you separate climbing and descending aircraft already? This can’t be something you’ve suddenly noticed?
A: Controllers have always been able to use the full extent of controlled airspace to manage aircraft safely and efficiently. This is very congested airspace and we have a programme to continually improve our procedures as traffic increases. This particular procedure is part of a larger programme to systemise our airspace which means that traffic patterns will be more predictable for controllers. Systemising the airspace is a key element of the Government’s Future Airspace Strategy, which seeks to make best use of the technology on-board today’s high-performing aircraft, helping them fly more accurately.

Q: Will you revert to how it was before?
A: This is a procedural change – in other words, a change to the way controllers direct aircraft within existing published airspace – and we do not plan to revert to previous procedures. Primarily, this change improves the safe and efficient management of traffic departing from Heathrow on this route, which is used by approximately 6% of all Heathrow departures.

Q: Does this affect people under the Compton route when the airport is on westerly operations?
A: No

Q: How much attention do you pay to the effect of noise on people living underneath the flight paths?
A: We are acutely aware of the impact of noise on communities below flight paths and work constantly to reduce it – we have pioneered continuous descent which reduces noise on arrivals, and this change enables continuous climb which will get aircraft higher, quicker and thus also reduce overall noise. On average, aircraft on this route will now be 1000ft higher than previously when they fly over communities such as Ascot and Virginia Water.

Q: Is this part of NATS preparations for a new runway?
A: This change is nothing to do with any potential airport expansion

Q: Is this just a means of drip feeding in changes that you hope people won’t notice?
A: NATS has a long term programme of proposed airspace change to achieve the Government’s Future Airspace Strategy, all of which will be subject to full public consultation. This particular change is not an airspace change – it is a change to the way controllers direct aircraft within existing published airspace, which is part of NATS’ licence obligation to provide safe and efficient air traffic management in UK airspace.

Q: How will we know if you plan to do anything like this again?
A: NATS has already taken steps to ensure more robust processes are in place to share relevant information with Heathrow so that they are aware of any changes that may be noticed by local residents.

Q: This change has still had the effect of changing noise on the ground. What other procedural changes has NATS made that have affected flights around Heathrow?
A: Small changes are made to procedures on a very frequent basis in order to ensure and enhance safety and efficiency. These are not changes to airspace but changes to the distribution of traffic in existing published airspace. Any proposed changes to published routes over the ground are subject to full consultation under the CAA’s airspace change guidance.

Controllers tactically vector aircraft to ensure a safe and efficient flow of aircraft through their sector, using all of the available airspace and may change where they position inbound or outbound tracks according to many variable factors in a dynamic environment (e.g weather, congestion, technical issues etc).

Q: How many flights use this route?
A: Data for 1 September 2014 to 20 July 2015 shows a total of 69 easterly-only days, with an average of 108.5 flights per day. There were more than 100 flights on 49 of those days. The highest recorded volume was on April 18 with 137 flights, and the lowest on November 28 when there were 57 flights.  It is important to note that a sizeable proportion of these flights would already have overflown the more northerly part of this area of airspace.