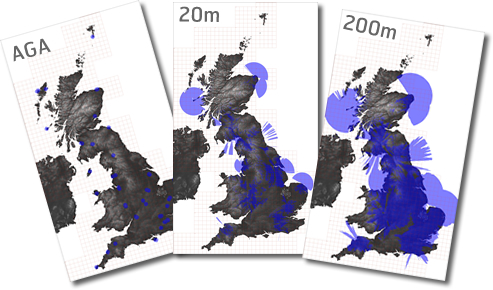 The assessment of the impact of wind turbines on the electronic infrastructure required to operate an air traffic service is complex and dependent on a wide range of factors – many of them statistical rather than fixed in nature. When NERL carry out an assessment as to the potential impact of proposed developments this is done using the latest understanding of industry best practise and a range of in-depth analysis tools are employed.

It is not possible to replicate this process in a simple diagrammatic format; however the following maps have been designed as an aid to developers in understanding where interference with NERL infrastructure is likely.  They do not represent an exhaustive list of the areas where there is a potential impact to NERL’s infrastructure nor do they represent no-go areas where NERL will automatically object to proposed wind turbines.

For each of the 54 air-ground-air (AGA) communication stations, 55 navigation aids and 20 secondary surveillance radar operated by NERL a consultation zone has been provided; 10km for the air-ground-air communication stations and navigation aids and, in line with CAA publication CAP764, 15 nautical miles (nm) for the secondary surveillance radar. Upon receiving a turbine planning application these are the ranges within which NERL would carry out an in-depth assessment for equipment of these types.

CAP764 Appendix 2 details a simple line-of-sight method to assist in determining whether a further more detailed assessment needs to be carried out in relation to primary surveillance radars. To aid developers with this task, a number of maps have been produced corresponding to turbines with tip heights from 20 to 200m describing the areas where turbines of the relevant height would be within line-of-sight of at least one of the primary surveillance radars operated or used by NATS En-Route.

Please note that in some cases, NATS take a data feed from an airport radar to provide an en-route service from one of its centres. An example of this is Glasgow radar providing data to the NATS Prestwick centre, as well as serving the airport itself. It is important to appreciate that this can give rise to the situation where two stakeholders can make conflicting statements based on the same asset. For example, Glasgow airport may state that there is no impact upon its airport radar due to a specific development, but NATS may object to that same development based on the impact on Glasgow radar.

This can happen because the radar’s coverage is used by the Air Traffic Control units to provide a service in different areas; as such a specific turbine may impact one but not the other operator. Obviously, the converse situation is also possible, whereby NATS states there isn’t an issue, while Glasgow airport objects.

These maps are made available in order for applicants to ascertain whether their proposed development is anticipated to have an impact upon NATS En-Route’s infrastructure and operations. It does not consider airports. Although some airport radar cover is included in these maps, such as Glasgow and Edinburgh, it is only because these radars are fed into a NATS centre.

Whether the impact upon an airport is acceptable or not, can only be determined by consulting the airport in question. Where the airport has agreed provision of a pre-planning service with NATS, this information can be obtained by undertaking a pre-planning assessment (refer to the pre-planning page).

Please note that when producing the maps, the earth’s radius was extended by a factor of 2 in order to take into account simple ‘over the horizon’ effects as discussed in section 5 of the appendix. No attempt however was made to take into account the detailed diffraction geometry of any specific locations.

The maps are available to download as either Google layers (kmz) files, or shp files, both file types are zipped. The kmz files can easily be visualised using Google Earth, while shp files can be imported into any GIS software package.

Please be aware that all images including maps and ESRI shape files are subject to copyright and may not be reproduced or altered in any way without prior permission from NATS.

This file contains a subset of layers detailing Primary Surveillance Radar (PSR) cover from 20m to 200m. This is divided into north and south to reduce sub-layer file size.

This file contains 78 shx, dbf, & shp files containing the same information as the Google maps above. These are both in OSGB and WG-84 format and are suitable for importing into GIS applications such as ARCGIS.

Note: Airport installations such as SSR, navigation aid or communication sites which are not be operated by NATS do not appear on this map.

In all cases, the purpose of the maps is to identify whether the development is outside of any safeguarded or radar cover area. Should this be the case, NATS En-Route would not object to the development should planning permission be applied for.

Should a proposal fall within any of the areas depicted by the maps, while this does not automatically mean an objection, it does mean that a detailed assessment is required. In this case, NATS’s advice would be to undertake a pre-planning assessment.

The above maps are provided for guidance only and do not affect the consultation requirements for formal planning applications set out in The Town and Country Planning (Safeguarded Aerodromes, Technical Sites and Military Explosive Storage Areas) Direction 2002; they are provided without prejudice and shall not affect NATS’s statutory right to object to any formal planning application in respect of any proposed development. NATS accepts no liability for any costs, expenses or damages of any nature whatsoever incurred by any reliance on the above maps.

Our expertise This interactive map will guide you through the complex world of aviation, showing how we can help in a number of crucial areas.